Experiments have been consistent with the Theory of the Pyramidal Cube Shape of the Nucleus.

Pear shaped nuclei were found. Radon is described in this paper by many authors and Gaffney.
http://ns.ph.liv.ac.uk/~lg/papers/StudiesOfNuclearPearShapesUsingAcceleratedRadioactiveBeams_Archive.pdf

Static locations of protons and neutrons are mentioned, quote
" For certain combinations of protons and neutrons there is also the theoretical expectation that the shape of nuclei can assume octupole deformation, corresponding to reflection asymmetry or a "pear-shape" in the intrinsic frame, either dynamically (octupole vibrations) or statically (permanent octupole deformation). " Gaffney et al.


Pear Shaped Barium experiment
Before I discovered the shape of the iron nucleus, other people had a blurred picture of the nucleus.
Here is an idea for a pear shaped nucleus of Barium by a researcher:

That Neon paper has Schrodinger's Algebra giving the same
result as Folmsbee's Geometry. If you compare the color image on that link with the neon models  here in Figures 3 and 4 you will see they have the same shape and proportions. 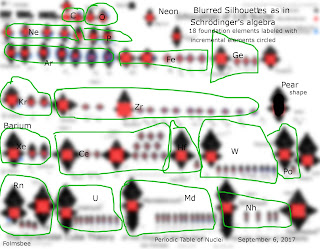 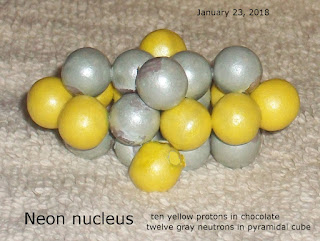 See the last image on this page for isotopes from fission. Some are heavy fragments and some are light, with a distribution that has two modes.
http://www.ikp.tu-darmstadt.de/gruppen_ikp/ag_noertershaeuser/research_wn/exotic_nuclei_wn/index.en.jsp

The Uranium fission products differ by 27 as minimum because the 3x3x3 cube has
27 baryons. When element 92 breaks up, the cube stays together as part of a fragmental fission product. Some fragments have the cube, some fragments do not retain the cube. That makes two modes for fragments to use. The experimental data show two modes of fission products. Element 70 and element 80 mark near end of two distributions. They differ by about 27 nucleons in their A mass number. Cubes are tougher than some geometries on nuclei. (2/6/19 acf)

Iron is magnetic because...

The element with the most spectacular properties is Fe. That is why I selected Fe to explore the shape of the nucleus using glass beads. I did not design in the Two Loops of protons, I discovered the Loops after the model was assembled. I looked at the completed mock-up of the Iron nucleus and I saw the Loops that cause ferromagnetism.

Iron is magnetic because there are two loops of protons in the nucleus of its atom. Element 26 has 12 protons in one ring that is coaxial with 12 more protons in second ring. 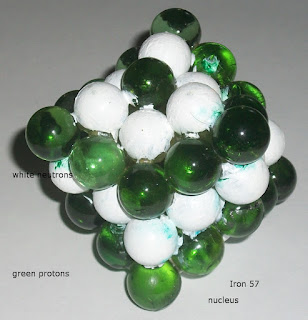 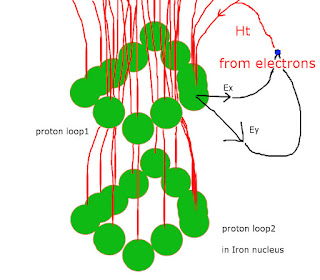 Figure 5: 3D membrane from one iron proton to one remote electron in a second Bar Magnet 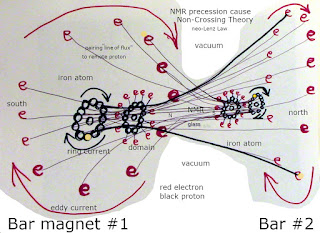 Figure 6 is discussed on my youtube video
https://www.youtube.com/watch?v=miZTTD0EPJs
All motions are clockwise, so Lenz's Law is consistent with this non-crossing law.
That puts the negative sign in Faraday's Law. Conservation of continuum.

Geometry, not Schrodinger's Algebra, has the realistic model of the nucleus.

Iron details and gravito-Maxwellian Equations for an Atom of Fe

Rene Hauy : expert on crystals. Photo of sketch like a nucleus with pyramids on a cube.

Also about Hauy,
https://novumveritasuniversalis.wordpress.com/2012/07/14/crystallography-part-one-orthographic-and-fischer-projections/
says
"model of a crystal structure, given by Rene Hauy in 1803, was reprinted in the Journal of Ultrastructure Research in 1958, and again in 1966 in the above mentioned textbook, titled “Elements of Organic Chemistry as Revealed By the Scientific Method” in reference to the exceptional correspondence between the early models, and the micrographs captured in the twentieth century. It is clear from Hauy’s model, that the foundational inspiration is clearly inferred by the ruling of lines which inform the building of the isometric matrix." Hauy.

Prior Art : "pyramidal cube" phrase is used in a book on minerals with a crystal lattice. It is also called a tetrahexahedron. Authors Johan Georg Heck and Spencer Fullerton Baird, "The Sciences of Chemistry, Minerology, and Geology, Illustrated with an Atlas..." rare book search. 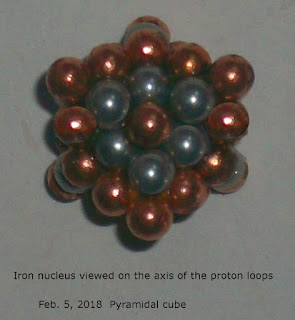 This cube theory explains why lithium is rare and iron is common and
why technetium is light weight and radioactive and
why cerium and iron spark when struck and
why iron is magnetic and manganese is not and
why carbon is different from all other elements and
how gravity becomes the strong nuclear force at close range to a nucleus and
why eddy currents flow near iron and
why barium is pear shaped and
why neon has that shape in that reference paper and
why gadolinium is ferromagnetic and
how neutrons help fusion be stable and
how each electron is paired to one proton and
what is a photon and
why the ratio A/Z approaches 8/3, mass number / atomic number and
why an electron is repelled by a nucleus, stable in an atom and attracted by a remote proton and
why fission splits uranium into two unequal fragments differing by a 27 baryon count: 3x3x3 and
why three jets come from a proton impacted by an electron without quarks being needed. 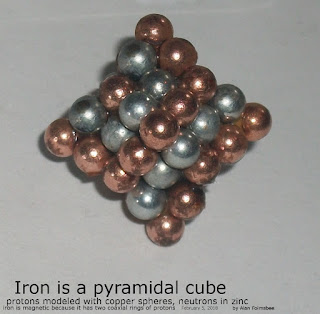 Periodic Table of the Shapes of Nuclei

The nucleus of the element iron was discovered to have the shape of the Pyramidal Cube. Figure 0: Scale model using 5 trillion x scale of the iron atom's nucleus  Iron is ferromagnetic because it has two coaxial rings of protons. Each ring has 12 protons. Fig 1: 118 elements magnified 5 trillion x  (correction needed for Np neptunium spelling, May 30, 2021) The red lattice is made of protons and neutrons, in Fig. 1 . The silhouettes of all elements are shown for a theory using a static nucleus. The static nucleus theory asserts that spherical nucleons are stacked into fixed places for each element. This is not a dynamic structure, each nucleus keeps its face armored cubic structure permanently. Notice that a separation of columns in the table highlights that elements on the right side of the table are all diamagnetic. The rightmost 8 groups are diamagnetic for periods 4 through 7. (Period 7 is in doubt in some sources. May 30, 2021). 2/28/2020